Imagine the scene, you are lying in bed, drifting into a deep and content slumber, when suddenly, an evil laughter erupts into the night, you sit up and look round. Did you imagine it? Is your mind playing tricks on you? Was that second glass of wine really necessary? (of course, it was, stop doubting yourself).

Then it happens again, the laughter echoes across your room and from the corner of your eye you spot your Alexa light up, chuckling away at her own little joke. Creepy right? Over the last few weeks more & more people have been experiencing the freaky interruptions from their beloved Alexa.

I don’t know about you but I have my own Amazon Echo. In ways Alexa has become my Alfred, she knows all and I am pretty sure she sees all too, kind of like my mammy. I can ask her anything and immediately she lets me know, what the weather will be like for the next few days, who won the rugby over the weekend, when my pizza is cooked, she is great. Now she seems to have developed a mind of her own and is laughing to her hearts content, probably hatching an evil plan on world domination.

Unless you live under a rock in the middle of nowhere, also known as Co. Laois, then you may have heard the great Stephen Hawkins passed away yesterday, he was most famously known for giving the first real physical insight, which was solid and dependable, into gravitational physics in the quantum domain. Now if that sentence has stumped you, not to worry you’re not the only one, imagine Penny from the Big Bang Theory’s faces when Sheldon tries to describe Leonards job and that is my facial expression right now trying to understand the great work of Stephen Hawkins. 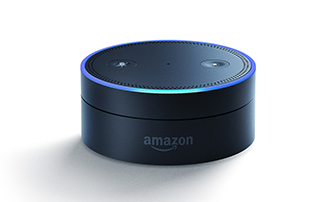 Apart from his work in science though his work and insight into the world of technology cannot be over looked. In 2017 at a web summit in Lisbon Stephen said the following “Technology can hopefully reverse some of the harm caused to the planet by industrialisation and help end disease and poverty but artificial intelligence needs to be controlled”. He stated “The rise of AI could be the worst or best thing that has happened to humanity”.

So, was he correct? Will we wake up one morning in a scene similar to iRobot, our households overrun by Alexa, laughing her evil laugh? Or will Alexa know her place and keep reminding me when my pizza is about to burn?

Stephen stated “We simply need to be aware of the dangers, identify them, employ the best possible practice and management and prepare for its consequences well in advance.”

Well I am aware Alexa is adopting more human like characteristics, I just hope she can learn skills too, like baking. For now, I am going to listen out for her evil cackle to try a determine what is cracking her up and see if she has adopted any other human characteristics. I’ll keep you updated.

This website uses cookies to improve your experience while you navigate through the website. Out of these, the cookies that are categorized as necessary are stored on your browser as they are essential for the working of basic functionalities of the website. We also use third-party cookies that help us analyze and understand how you use this website. These cookies will be stored in your browser only with your consent. You also have the option to opt-out of these cookies. But opting out of some of these cookies may affect your browsing experience.
Necessary Always Enabled
Necessary cookies are absolutely essential for the website to function properly. This category only includes cookies that ensures basic functionalities and security features of the website. These cookies do not store any personal information.
Non-necessary
Any cookies that may not be particularly necessary for the website to function and is used specifically to collect user personal data via analytics, ads, other embedded contents are termed as non-necessary cookies. It is mandatory to procure user consent prior to running these cookies on your website.
SAVE & ACCEPT
Go to Top